For Paul Hermelin, Chairman and Chief Executive Officer of Capgemini Group, “Having started the year with a good momentum, the Group has delivered an excellent first-half. Our revenue is up 14.4% at constant exchange rates and our operating margin increased sharply (+1.5 points) to 10.2% of revenues with margin improvement in each of the Group's regions.

We continue to expand in market segments driven by innovation. Demand for Digital & Cloud remains solid with a 32% revenue progression. Our Consulting business also benefits from its position on Digital Transformation with growth of 8.1%.

We expanded our portfolio of innovative services with a Digital Manufacturing offering targeting industrial companies and launched the new Automation Drive service line, bringing together all the Group’s automation technology and expertise.

This first-half has also seen confirmation of the successful integration of IGATE which has been operating under the Capgemini brand since January: synergies are delivered ahead of plan and sales momentum is excellent, as evidenced by sustained growth in key accounts.

Finally, our global network of delivery centers now counts over 100,000 employees and represents 55% of the total Group headcount. This is key to our competitiveness, notably with a growing demand in Europe.
Based on the first half results, we are raising our operating margin guidance for full year 2016 to between 11.3% and 11.5%.”

New orders recorded during the first six months of 2016 totaled €6,341 million, compared to €5,309 million reported for H1 2015.
Operating margin is up 31% year-on-year to €638 million, and represents 10.2% of revenues, up 150 basis points year-on-year, with an increase in all Group’s regions and businesses. Beyond the positive impact of the integration of IGATE and associated synergies, this improvement in profitability demonstrates the value created by the ongoing industrialization of Group operations and the increasing contribution from high value offerings in Digital & Cloud.

Other operating income & expense totaled €128 million. The increase is primarily due to the integration costs and the amortization of intangible assets related to the acquisition of IGATE.
H1 2016 operating profit increases to 8.1% of revenues or €510 million, up 14% year-on-year.

Net financial expense is €62 million, up €21 million on H1 2015, mainly due to the cost of the IGATE acquisition financing. The income tax expense is €87 million, down €40 million year-on-year notably due to the recognition of a deferred tax asset of €32 million.

The Group generated an organic free cash flow of €31 million in H1 2016, an improvement of €117 million compared to H1 2015. Return to shareholder amounted to €394 million over the period through a dividend payment of €229 million and share buyback in the amount of €165 million.

OUTLOOK
For 2016, the Group upgrades its operating margin forecast to between 11.3% and 11.5% (compared with 11.1% to 11.3% previously). In addition, the Group confirms its guidance for 2016 of revenue growth at constant exchange rates of 7.5% to 9.5% and organic free cash flow generation in excess of €850 million.
The Group estimates the negative impact of currency fluctuations on revenues at -2%, primarily due to the appreciation of the euro against the pound sterling and the Brazilian real.

* The terms and non-GAAP measures marked with an (*) are defined and/or reconciled in the appendix to this press release.

Consulting Services (4% of Group revenues) reaping the benefits of its repositioning on Digital Transformation reported an increase in revenues of 8.1% at constant exchange rates with strong growth in the UK. Operating margin improved 230 basis points year-on-year to 10.4%.

Technology & Engineering Services (15% of Group revenues, previously known as Local Professional Services) reported revenue growth of 13.1% at constant exchange rates in the first six months. Growth was driven, beyond the IGATE contribution, by North America and Rest of Europe regions. The operating margin increased 260 basis points year-on-year to 11.3% in the first half.

Application Services (60% of Group revenue) reported an increase of 17.2% at constant exchange rates for the first-half. Beyond the contribution of IGATE, growth was mainly driven by an acceleration in Europe. Operating margin rose to 11.4% from 10.0% in 2015.

Other Managed Services (21% of Group revenue) reported 9.3% growth in revenues at constant exchange rates thanks to the impact of IGATE and despite the anticipated marked drop in activity in the United Kingdom. Operating margin is 9.2%, up 100 basis points on the first-half 2015.

North America (30% of Group revenues) reported, including the integration of IGATE, revenue growth at constant exchange rates of 36.2% year-on-year, driven by the financial services, consumer goods and retail and manufacturing sectors. Excluding the Energy & Utilities sector where the slowdown accelerated in the second quarter, like-for-like growth was 5%. Operating margin increased 180 basis points to 15.1%.

United Kingdom and Ireland (17% of Group revenues) reported revenue growth of 8.6% at constant exchange rates. Local momentum was boosted by contract wins in the private sector which now represents more than half of revenues and reported double-digit organic growth, while the public sector was down as anticipated. The operating margin improved 180 basis points year-on-year to 14.5%.

In the first-half 2016, France (20% of Group revenues) reported a 4.8% increase in revenues, fueled by strong traction in application services. The financial services and consumer goods and retail sectors were the most dynamic during the period. Operating margin improved 40 basis points year-on-year to 6.6%.

Rest of Europe region (which now includes Benelux and represents 26% of Group revenues) reported 6.9% growth in revenues at constant exchange rates, with all geographies and sectors contributing to this result. The operating margin increased 110 basis points to 8.9% for the half-year.

The Asia-Pacific and Latin America region (7% of Group revenues) reported growth of 10.3% at constant exchange rates. Growth remains very dynamic in Asia-Pacific, driven by the financial services and consumer goods and retail sectors. The economic environment remains weak in Brazil but the negative impact on Group growth is reducing. The operating margin, traditionally low in the first half of the year in this region, increased 60 basis points to 3.8% of revenues.

Q2 TRENDS
Q2 revenue growth was 15.0% at constant exchange rates, up sequentially 1.1 points on the first quarter. In the second quarter, adjusted for the impact of exchange rates and changes in Group scope, Continental Europe accelerated, North America growth reached its lowest point of the year and Brazil showed signs of improvement. At Group level, organic growth accelerated in Q2 to 3.8%, compared with 2.9% in Q1.

BALANCE SHEET
The Group had €1,487 million in cash and cash equivalents (net of bank overdraft) at June 30, 2016. After accounting for borrowings of €3,867 million mainly related to IGATE acquisition financing in 2015, cash management assets and derivative instruments, Group net debt* amounts to €2,278 million at the end of H1 2016. The increase in net debt in the first-half is mainly due to the payment of the dividend and the share buyback program.

APPENDICES
Organic growth, or like-for-like growth, in revenues is the growth rate calculated at constant Group scope and exchange rates. The Group scope and exchange rates used are those for the published fiscal year.
Operating margin is one of the Group’s key performance indicators. It is defined as the difference between revenues and operating costs. It is calculated before “other operating income and expense” which include amortization of intangible assets recognized in business combinations, the charge resulting from the deferred recognition of the fair value of shares granted to employees, and non-recurring revenues and expenses, notably impairment of goodwill, badwill, capital gains or losses on disposals of consolidated companies or businesses, restructuring costs incurred under a detailed formal plan approved by the Group’s management, the cost of acquiring and integrating companies acquired by the Group, and the effects of curtailments, settlements and transfers of defined benefit pension plans.
Normalized net profit is equal to profit for the year (Group share) adjusted for the impact of items recognized in “Other operating income and expense”, net of tax calculated using the effective tax rate. Normalized earnings per share is computed like the basic earnings per share, i.e. excluding dilution.
Organic free cash flow is equal to cash flow from operations less acquisitions of property, plant, equipment and intangible assets (net of disposals) and adjusted for cash out relating to net interest cost.
Since January 1, 2016, the “Rest of Europe” region groups together the former “Rest or Europe” and “Benelux” regions. 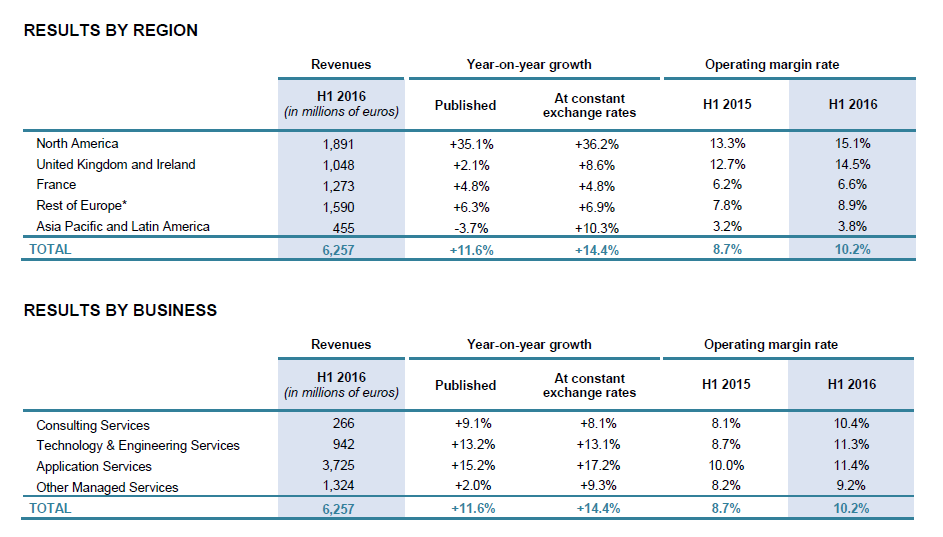