Paris, France - January 14, 2014 - Luc-François Salvador, Chairman and Chief Executive Officer of the Sogeti Group, a 100% subsidiary of the Capgemini Group, has appointed Bernard Barbier as special advisor on Cyber Security and Cyber Defense for Sogeti. Bernard Barbier is in charge of reinforcing Sogeti’s capabilities in this field of expertise on a global level. 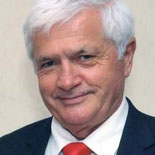 Mr Bernard Barbier has until now been the Technical Director for the General Directory of External Security (DGSE), a part of the French Ministry of Defense. The Ethics Committee within the Ministry of Reform of the State, Decentralization and Public Service, ruled in favor of this recruitment after reviewing the file. Cybersecurity, a new geostrategic space, is one of the strategic developments of the Group. Strengthening its international position allows the Sogeti Group to respond to changing client needs, in line with the complexity of technology and regulatory constraints.

Bernard Barbier, 60 years of age, a graduate at the Ecole Centrale in Paris, started his career at the a French government-funded technological research organization, Atomic Energy Commission – CEA, within the Directorate of Military Applications (DAM) in Limeil-Valenton, France (1977-1989). He has worked as a Research Engineer, and successively as the Manager for the Instability Modeling unit at the heart of the Fusion Department. Director of Cryptology Services, then Head of the Technological Research Department at the DGSE within the French Ministry of Defense (1989-1996), he then joined the CEA in Grenoble, France heading the Information Systems Department under the Laboratory of Electronics and Information Technology – LETI (1996-2000). He was then appointed Chief Information Officer at the CEA (2000-2003) and Director of LETI at CEA in Grenoble (2003-2006). In 2006 he became the Technical Director for the General Directory of External Security (DGSE), within the French Ministry of Defense.

Cyber Security: A state of an information system allowing it to withstand events from cyberspace that may compromise the availability, integrity and confidentiality of data stored, processed or transmitted and the related services that these systems offers or provides access to. Cyber Security uses security techniques and information systems and is focused on the fight against cybercrime and the establishment of a cyberdefense.

Cyber Defense: Technical and non-technical measures allowing a state to defend itself and its essential information systems in cyberspace.

About Sogeti
Sogeti is a leading provider of technology and software testing, specializing in Application, Infrastructure and Engineering Services. Sogeti offers cutting-edge solutions around Testing, Business Intelligence & Analytics, Mobile, Cloud and Cyber Security, combining world class methodologies and its global delivery model, Rightshore®. Sogeti brings together more than 20,000 professionals in 15 countries and has a strong local presence in over 100 locations in Europe, USA and India. Sogeti is a wholly-owned subsidiary of Cap Gemini S.A., listed on the Paris Stock Exchange.