First Half 2017: Capgemini confirms its momentum

Paris, July 27, 2017 – The Board of Directors of Capgemini SE chaired by Paul Hermelin, convened in Paris on July 26, 2017 to review and authorize the issue of the accounts2 of Capgemini Group for the 1st half of 2017.

For Paul Hermelin, Chairman and Chief Executive Officer of Capgemini Group: “After starting the year on a solid footing, the momentum accelerated in the second quarter. First-half results are robust, confirming our ability to support our clients’ digital transformation and process industrialization. Our portfolio’s transition towards Digital and Cloud continues and these activities account for 37% of Q2 revenues. Our automation offerings are also expanding, with 4,000 experts in Robotic Process Automation, cognitive technologies and artificial intelligence.

These results reflect the good alignment between our innovative offerings and growing client demand across all sectors and geographies. Continental Europe is particularly dynamic with double-digit growth in Germany and Italy and solid momentum in France. Growth in North America is recovering as planned and should strengthen by the end of the year.

The acceleration of our growth combined with our operating margin expansion confirms the relevance of our strategy. Following these strong first-half results, we confirm our targets for revenue growth, operating margin and free cash flow for 2017, the year of Capgemini’s 50th anniversary.” 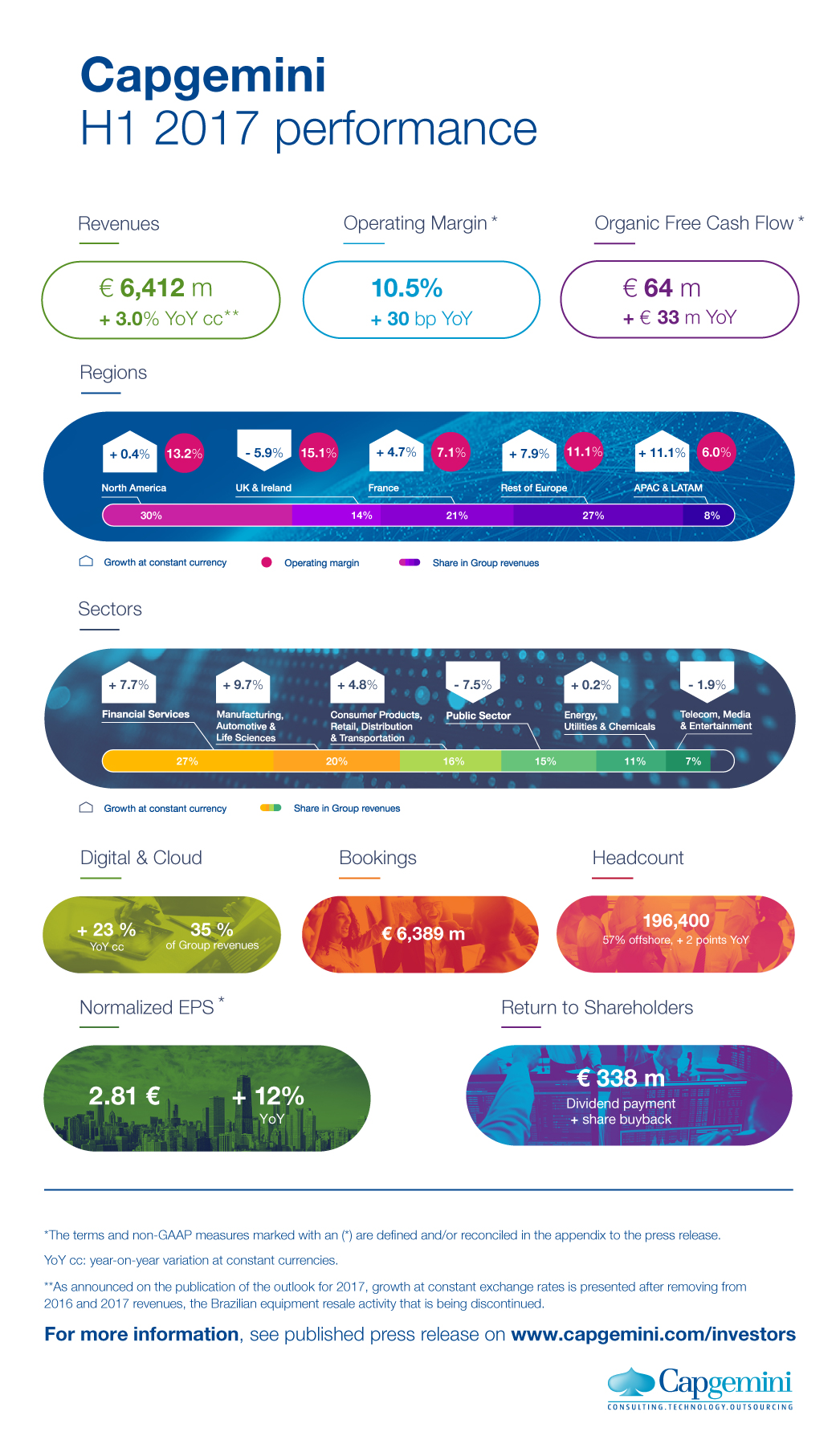 In Q2, Group growth accelerated slightly to reach 3.3% year-on-year at constant exchange rates and 2.9% on an organic basis. Digital & Cloud accounted for 37% of revenues up from 32% in Q1.

Bookings totaled €6,389 million in the first six months of 2017, compared with €6,341 million reported for H1 2016, which benefited from the renewal of a major multi-year contract in the UK public sector.

Other operating income and expenses total €134 million, compared with €128 million in H1 2016. Restructuring costs increased to €50 million, while acquisition and integration costs fell to €17 million.

The net financial expense is €28 million, down €34 million year-on-year, following a reduction in Group debt and the gain realized on the early unwinding of currency swaps set up in connection with IGATE acquisition financing.

The income tax expense is €140 million. The €53 million year-on-year increase is mainly due to the recognition of deferred tax income of €32 million in H1 2016.

The Group generated organic free cash flow* of €64 million in H1 2017, an improvement of €33 million on H1 2016. Return to shareholder amounted to €338 million over the period, comprising a dividend payment of €262 million and share buybacks totaling €76 million.

OUTLOOK
For 2017, the Group forecasts revenue growth at constant exchange rates of 3.0%, an operating margin of 11.7% to 11.9% and organic free cash flow generation in excess of €950 million.

Technology & Engineering Services (15% of Group revenues) grew 3.5% in H1, bolstered by strong growth in France and Scandinavia. The operating margin increased 90 basis points year-on-year to 12.2% for the half-year.

Application Services (62% of Group revenues) fully benefit from new demand driven by Digital and Cloud, recording revenue growth of 5.6% at constant exchange rates in the first-half. Growth is approaching or exceeding 10% in many European countries (France, Germany, Sweden, Italy) but also in Asia. The operating margin increased 50 basis points to 11.9%.

Other Managed Services (19% of Group revenues) reported a 6.6% decrease in revenues. This was mainly attributable to Infrastructure Services and reflects notably the anticipated decline in the UK public sector. The operating margin is 7.7% compared with 9.2% in H1 2016.

OPERATIONS BY REGION
In H1, as planned, North America (30% of Group revenues) began to restore its growth momentum, reporting a slight increase of 0.4% at constant exchange rates. In this region, the Energy & Utilities sector confirmed its recovery, with a fourth quarter of sequential revenue stability, while the Financial Services and Manufacturing sectors were the most dynamic. The operating margin fell 190 basis points to 13.2%, impacted by strong price pressure on large contract renewals and investments to boost growth in the region.

The United Kingdom and Ireland (14% of Group revenues) reported revenues down 5.9%, reflecting a decline in the public sector in line with our forecast and a healthy private sector (62% of region revenues), particularly in Financial Services and Energy & Utilities. The operating margin increased 60 basis points year-on-year to 15.1%.

France (21% of Group revenues) grew 4.7%, driven by Application Services and Technology & Engineering Services. The Financial Services, Manufacturing and Retail & Consumer Goods sectors were the most dynamic over the period. The operating margin improved 50 basis points year-on-year to 7.1%.

The Rest of Europe (27% of Group revenues) reported revenue growth of 7.9% at constant exchange rates, with all geographies and sectors contributing. The Group reported double-digit growth in Germany and Italy and in the Retail & Consumer Goods and Manufacturing sectors. The operating margin increased 220 basis points to 11.1% for the half-year.

Asia-Pacific and Latin America (8% of Group revenue) grew 11.1% at constant exchange rates. In Asia-Pacific, which now accounts for three-quarters of activity in this region, growth momentum continues to be buoyant, fueled by the Financial Services and Retail & Consumer Goods sectors. Activity in Latin America continues to decline with a challenging economic environment in Brazil. The operating margin increased 220 basis points to 6.0%.

BALANCE SHEET
The Group had €1,315 million in cash and cash equivalents (net of bank overdrafts) at June 30, 2017. After including borrowings of €3,472 million, mainly comprising IGATE acquisition financing secured in 2015, cash management assets and derivative instruments, Group net debt* totals €1,929 million at the end of H1 2017, compared with €1,413 million at the end of 2016. The increase in net debt in the first-half is mainly attributable to the dividend payment and the share buyback program.

FUTURE APPLICATION OF IFRS 15
IFRS 15 on revenue recognition becomes effective on January 1, 2018. The Group has been working with international sector peers and within Syntec Numérique in France on its implementation terms.

The Group can resell hardware, software and services purchased from third-party suppliers to its clients. The new standard amends the principles and indicators determining whether the Group should present these transactions on a gross or net basis (i.e. revenues invoiced to clients are presented net of amounts invoiced by suppliers). Based on preliminary analyses, the Group expects more transactions to be presented on a net revenue basis, resulting in a decrease in revenues estimated to date at around 2%.

The Group will further specify the application impact of this standard when it publishes its 2017 financial statements.

CONFERENCE CALL
Paul Hermelin, Chairman and Chief Executive Officer, Aiman Ezzat, Chief Financial Officer and Rosemary Stark, Global Sales Officer, will present this press release during a conference call in English to be held today at 8 a.m. Paris time (CET). You can follow this conference call live via webcast at the following link. A replay will also be available for a period of one year.

All documents relating to this publication will be placed online on the Capgemini investor website at https://www.capgemini.com/results.

This press release does not contain or constitute an offer of securities for sale or an invitation or inducement to invest in securities in France, the United States or any other jurisdiction.

1 As announced on the publication of the outlook for 2017, growth at constant exchange rates and organic growth are presented after removing from 2016 and 2017 revenues, the Brazilian equipment resale activity that is being discontinued.
2 Limited review procedures on the interim consolidated financial statements have been completed. The auditors are in the process of issuing their report.
* The terms and non-GAAP measures marked with an (*) are defined and/or reconciled in the appendix to this press release.

A global leader in consulting, technology services and digital transformation, Capgemini is at the forefront of innovation to address the entire breadth of clients’ opportunities in the evolving world of cloud, digital and platforms. Building on its strong 50-year heritage and deep industry-specific expertise, Capgemini enables organizations to realize their business ambitions through an array of services from strategy to operations. Capgemini is driven by the conviction that the business value of technology comes from and through people. It is a multicultural company of 200,000 team members in over 40 countries. The Group reported 2017 global revenues of EUR 12.8 billion.