Sogeti trendlab VINT continues its research on technology-driven trends, launching a new series of reports on the topic of Machine Intelligence. 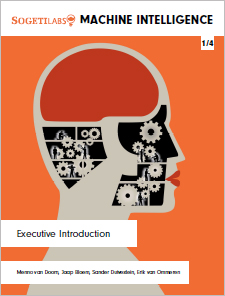 The sixtieth anniversary of Artificial Intelligence (AI) will take place in 2016. Many things have changed since the concept of AI was first launched. Following two winter periods and too many high expectations, the situation is finally clear: anyone who wishes so can start with machine intelligence tomorrow. Even the major players such as Amazon, Microsoft and IBM are embracing the current ‘AI for all’ era. Big Data, Machine Learning and the cloud offer you the chance to make more intelligent organizational decisions. Is something still missing in your toolbox? In that case, you can simply go to GitHub and check what kind of tools e.g. Airbnb, Google and Facebook have donated in that area.

After Mobile, Big Data and the Internet of Things, Machine Intelligence is The Next Big Thing. Machine intelligence is the accelerator of these predecessors. Especially thanks to the extremely improved hardware plus the explosion of data (the sine qua non of self-learning), we make breakthroughs in the field of this machine intelligence. With an impending breakthrough of machine intelligence, the interesting question is what change that will bring. In a series of reports on MI, Sogeti’s trend watches explore the potential impact, starting with a first report giving an executive introduction to Machine Intelligence, followed by three additional reports.

After the first executive introduction to MI, the SogetiLabs series of reports will dive into the following topics: The rise of the Personal Digital Assistant; moving from apps to cogs (cognitive systems), Persuasive Technologies; influencing behavior through machines, Corporate IQ and the Anatomy of fear of AI.