VINT Report: The Dark Side of Social Media

Alarm bells, analysis and the way out.


Sander Duivestein (1971) is a highly acclaimed and top-rated trendwatcher, an influential author, an acclaimed keynote speaker, a digital business entrepreneur, and a strategic advisor on disruptive innovations. His main focus is the impact of new technologies on people, businesses and society. He is therefore a much sought-after speaker for conferences, strategy sessions and other business gatherings.

When we were working on the VINT books Me the Media (2008) and The App Effect (2012), it became increasingly apparent that the dark sides of social and mobile media definitely called for a chapter of their own. Not to gloat over them, but to expose the related developments and concerns, and to think about a way out. We are not the only one. Recently several people have raised awareness for the Dark Side of Social Media.

In the first week of January 2013 a Tumblr website put our society into a fearsome perspective. The website features a collage of images of people staring down at their cell phones. They are lost in time. Frozen in the moment. Their body is in meatspace, but their mind is in cyberspace. They are completely detached from their surroundings. 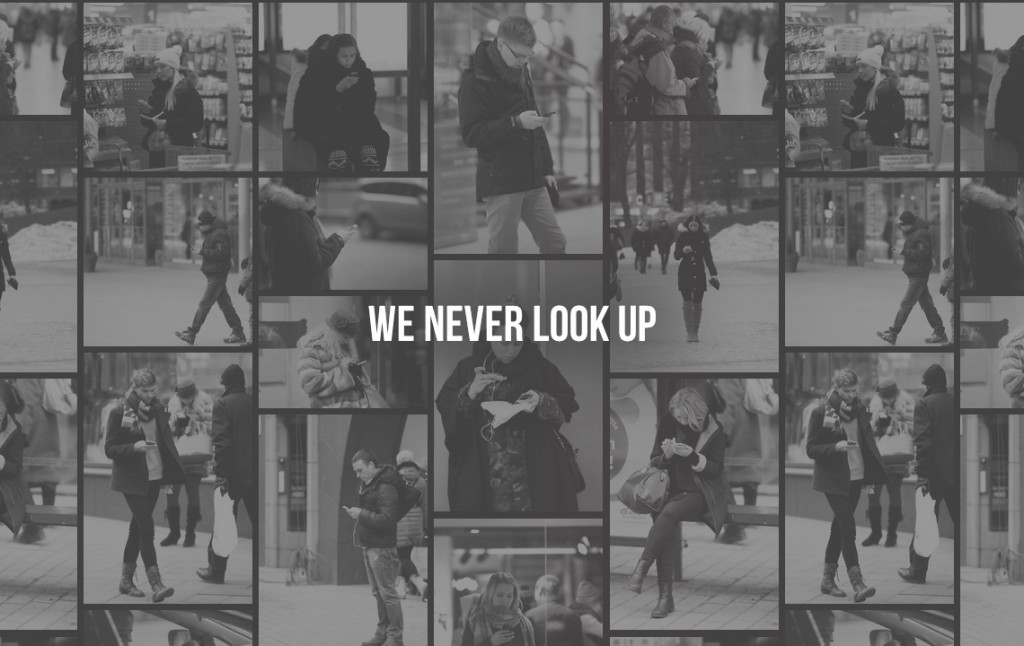 The blog is created by a researcher on mobility who lives in Helsinki, Finland. The About page contained the following statement: “The world has gone mobile. We live in an information society and are connected to information anywhere we go, and whatever we do, 24/7. And that has changed how we as people behave. We never look up anymore. ”

The Tumblr website “We Never Look Up” visualizes the society we now live in. It creates awareness for the effect that social media and smartphones are having on our lifes. In an interview with newspaper Metro the creator made the following comment: “I’m not saying it is a negative thing, when done safely. It’s just that we need to be aware of that times change, and behavior as well. But in social context, with friends, etc., it’s kind of rude to finger on your mobile the whole time. My message is not to judge, just to make this behavior con-crete.” Just like the creator of the Tumblr site, we have been keeping track of it all.

Recently Sergey Brin took the stage during an improvised keynote at the TED conference in California. During his speech Brin talked about the fact that smartphones are distracting people. “Is this the way you’re meant to interact with other people? Is the future of connection just people walking around hunched up, looking down, rubbing a featureless piece of glass? [...] It’s kind of emasculating. Is this what you’re meant to do with your body? You want something that will free your eyes?” The solution to the problem of distraction is according to Brin of course Google Glass.

In our trendreport “The Dark Side of Social Media” we dive into the question how social media and digital technology are affecting our lives. The report presents a three-stage rocket. It starts with a record of all sorts of alarm bells that went off throughout the years with increasing loudness. The subsequent part is an analysis dealing with ten jet-black consequences for 21st century Homo Digitalis Mobilis. And finally it presents a way out with the starting point that social is the new capital. Social business is growing, being focused on people-first, commitment and transparency. In addition, the age of context is coming. Uncontrolled real time should make way for controlled right time. Being “always on” will diminish as new technology that calls for attention at the right moment without constantly distracting will occur.

We believe that SlowTech should become the norm with reciprocal relationships being expressed in connections between apps, analytics, (big) data, media, mobile and social. We will have to become more responsible for our social behaviour and toughen up, offering resistance to temptations, particularly those of social media including games and the screen devices on which they operate.

We should no longer be slaves, but masters, of technology and make sure to prevent ourselves from drowning in the ever increasing flood of information. We imagine that the barb of hectic stress must be removed, something that can only be done on the basis of our behavior and with the help of technology. It is a combination that has put us in an awkward predicament, but that may also serve as leverage — using the right vision as a starting point — to add value and humaneness to our lives, both apart from and with social and mobile media.

To download the full report, please fill in following form: